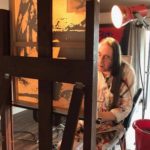 Acrylic, oil, wood, ceramic, leather, stone and glass are a few mediums I use to create Native American art forms. I am consumed with capturing the infinite aspect of the human soul. Subjects for my life sized portraits speak to me from ages past. I study a personality for many weeks before beginning my interpretation on canvas. Acrylic allows me to put my impressions down quickly, while its short drying time keeps me focused. The results are moving…I invite you to journey with me and meet the likeness and spirit of people who could no longer exist in today’s world. Look deep into their eyes, and you too will learn of their gifts. 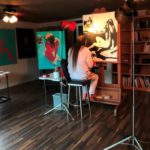 The International Artist known as Ironhand was born William Roy Swick on June 30, 1948 in Pendelton, Oregon. His family soon after relocated to Vista, California. He is a third generation artist. Ironhands training began at the tender age of four. At the age of thirteen, he had his first piece displayed at the Museum of Fine Arts in San Diego, California.

Ironhand spent twenty-four years in the United States Army Special Forces Airborne (The Green Berets). He retired as a Sargent First Class. Through these years, he never abandoned his true passion and has taught art at universities, colleges, and art schools across the United States. He has also been the subject of several television documentaries.

His artwork embodies the spirit of his race and the love of what he does. Ironhand works in many medias, hot glass, clay, graphite, oils, watercolors, bronze, wood, stone, the computer, and many others. He is still creating beautiful art in all medias. His work is extremely diverse and very prolific. His graphic drawings are so distinctive that many have argued as to their authenticity as a drawing and not a photograph.

2 years
Hosted by The Graffio Group
Press f for fullscreen.